Masters I Through to Cup Semi's 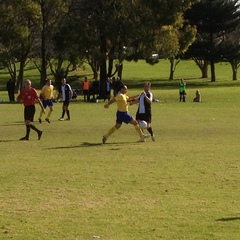 Hamersley Masters I went into their Cup QF in fine form with 8 consecutive league wins moving them to within touching distance of top of the table ECU Joondalup. The Cup form had not quite been so consistent however, despite the Rovers having been drawn at home for every round their progress to the QF had been somewhat fortunate, 2 out of the 3 victories coming from shoot-outs. The team were therefore under no illusions about the task ahead as their name came out of the hat to play Masters Premier League leaders Inglewood Utd at Carine once more.

Much debate was to be had (right up until about 30mins before ko) between whether to play on the larger or smaller pitches available. Do we suppress their probable technical superiority by turning it into a battle on the smaller area, or try to utilise our possible advantage in youth and fitness by stretching them on the larger pitch? We opted for the latter.

Five minutes in and things were already looking decidedly tricky. Inglewood started very sprightly with midfielders playing and moving off the front men with a slickness and cutting edge to their play that Hamersley had not experienced so far this season. Ten minutes in, despite Rovers showing some attacking moments of promise, worst fears were realised as Utd cut through incisively again, this time finishing calmly to go 1 up. Now, the Masters are no strangers to going behind and turning things around, but when you go down early against a team of such recognised experience and quality there is surely no truer test of footballing character. Three seconds of silence were then broken with the calls of encouragement and support from within the team as they looked around at each with true belief that they weren’t about to roll over.

The testament to Rovers determination was realised with a 20 minute spell of football that harried, harassed and at times panicked Inglewood into being the inferior eleven. The Hamersley equaliser around 5mins after going behind was a deserved one. Trevor Courcha bombed down the right flank before cutting the ball back from the goal line for Adrian Coppock to slide the ball into the Utd net. If they didn’t know before, Inglewood knew they were in for a game then. With so many players that had played at a high level within the state, Inglewood remained dangerous, and with the Utd forward receiving the ball and getting a half turn on his man, he was clever enough to win his team a penalty with some neat footwork. This penalty was calmly slotted away with around 10mins to go to half time for Utd to lead 1-2, sending the Rovers keeper the wrong way. 1-2 it remained to half time.

Two changes at half time for Rovers to freshen things up as Russel Clarke and Dave Boyle joined the action and contributed effectively to the team performance. Inglewood were still probably edging the play at this stage but the defence, led now by the steadfast Lea Taylor held firm. Rovers’ chances were hard to come by, but with Adrian Coppock and Aaron Kriletich being a constant physical threat up front, there wasn’t much peace for the Utd defence. The set piece delivery of Matty Baker had already caused Inglewood issues, and it was no surprise when he put in another well flighted ball into the box from a free kick 30 yards out. There were no easy goals to be had today, so it took a prodigious leap and connection from Craig Rogers to get on the end of the cross and head the ball in off the crossbar with 25 mins to go.

More fresh legs for Hamersley in the form of Kevin Dolan, Marc Scannell and Pine Clarke helped restrict Inglewood to only a few half chances in the remaining minutes. Rovers themselves having the best chance to win the game in normal time, when Adrian took advantage of a slip from a Utd defender to race clear only to pull his shot across goal and wide. Coach Kennedy made a few late subs in the last minutes to ensure he had his preferred penalty takers on the pitch as the ref blew up for the end of the match. Final score, 2-2.

Rovers won the toss and the right to go first in the shoot-out and Matty stepped up to put Rovers ahead, Utd’s player following up with a penalty identically placed low into the right stanchion. Aaron dispatched the next Rovers pen. Now was the time for Ian ‘Shay’ Griffin to stand up and be counted. With the coach’s encouragement still ringing in his ears he flung himself to his right to get a strong hand to Inglewood’s second pen and push it round the post. Trevor put Rovers 3-1 up with a well struck pen high into the net. Shay guessed right again and made a more comfortable save to leave Hamersley needing 1 from their last 2. Marc stepped up and calmly slotted away the winning penalty to the delight of the Masters biggest crowd of the season (36).

Huge credit to all the lads who gave 110% and never stopped believing it was possible. It’s not every day you get the opportunity to compete against the best the state has to offer in whatever category you play in, but today Hamersley Masters can say they actually beat the best.