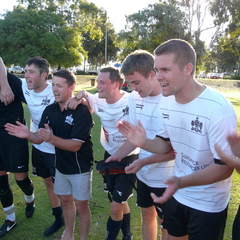 Hamersley's flagship 1st team secured runners up spot in their first season back in the Amateur Premier League after a 2 year absence. Nothing but a win would do with BB United snapping at our heals winning their game away to Joondalup United who had already been crowned champions. Although the opponants were already relegated International Calcio, they still put up a fight until Rovers ran away with the game at the end to record a 7-1 win.

The game started well for Hamersley with numerous chances before Steve Kruit flicked on a corner and Ben Ashton applied the finish. Minutes later Dave Howell sprung the Calcio offside trap and finished smartly in the bottom corner. The defence was holding strong and giving Haig Kingston plenty of protection in his last game in the Hamersley goal before heading home to the UK. Half-time 2-0.

Calcio came out in the second half which much more attacking intent and Kingston was called into action on a couple of occasions to keep the home team out. First team coach Craig Doble came on at right back to make his first team debut much to the delight of the Rovers faithful on the sidelines.

Rovers needed to get a hold of the game again and it came through a suburb bit of skill from Jimmy Young who beat the Calcio keeper from 30 yeards to make it 3-0. Not long after they were back in the game after a Ben Ashton foul was punished with a penalty which was put away well for 3-1.

Rovers were guilty of missing a few easy chances including a "Kanu" special from the out of sorts Shaun Gibbons. Another goal was needed to make the game safe and this duly cam from Martin Ireland who scrambled the ball home from a corner.

The fourth goal broke the game open and Hammers started to control things even better. Steve Kruit added a 5th before Joe Wright, making a cameo appearence, added a fortuitus 6th and a headed 7th with the last action of the game. A special mention to Nik Silsby who also made his first team debut on his retirement from the game after a more than 20 year, trophy laden career.

Daniel Scudder has also hinted he may hang up the boots, with his display on the day everyone will be hoping he changes his mind. After almost 10 years playing for Hamersley's first team it is hoped he has a couple more years left in the legs.

It was a fantastic way to end the season and fairwell Haig Kingston who has been immense in the Hamersley goal this season. A huge congratulations to Craig Doble for coaching the team to second spot in our first season back after promotion last season. Also a special mention to Ian Norgrove for coaching the reserves and provding goalkeeping backup and support all season.

Hamersley will be looking to build on this success and push for top spot in 2013. Roll on pre-season!