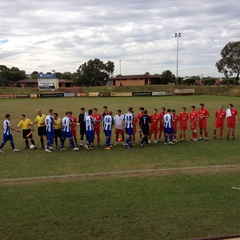 It was fun while it lasted but a comfortable 4-1 victory for State Premier League heavyweights Floreat Athena has ended Hamersley's cup run at the quarter-final stage. After knocking out Quinns FC, Ashfield and Kingsley, Floreat was always going to prove more of a test for Rovers with ex professional players on their books.

The game afforded the club some national exposure with Four Four Two magazine giving us a mention.

Bet365 were also offering odds on the game (first team coach Craig Doble was confident with a flutter for us to win 3-1 at 66/1!).

The team performed admiraby and tried to take the game to Floreat but after a couple of half-chances to Logan Crawford and James Young, Athena then hit the post and soon scored a well worked goal. Then a penalty only a minute later settled any nerves Floreat may have had and gave them a comfortable lead they never looked like losing.

Losing centre back Ben Ashton to suspension was a blow such is his influence in the backline. Rovers didn't give up and continued to push despite being 4-0 down and were rewarded with a goal from Steve Kruit. Further chances came and went but it was not to be and the team will focus instead on the two remaining Amateur competitions.

The club is very proud of the players and coaches acheivements and can hold their heads up high as the they got further in the competition than many established State Premier League clubs.