Rovers Through to Cup Semi-Final 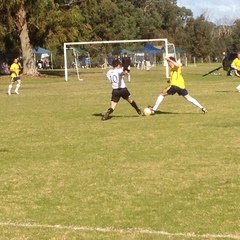 Hamersley hosted Belmont Villa in the Amateur Cup Quater-Final on Sunday as both teams were looking to reach the last four in the competition.

Hamersley started brightly and saw a couple of chances go begging before a good ball in from Conor Fullard caused problems for the Villa defence. James Young got a touch before the ball fell to Shaun Gibbons who forced the Belmost keeper into a save, he failed to hold onto it and Steve Kruit was on hand to bury the rebound.

Rovers hit the post shortly after but managed to double their lead just before the break when another good cross from the right found Steve Kruit in the box and he made no mistake to grab his second goal.

After half-time a good ball through left the Hamersley defence flat-footed and Belmont's Fode Minte took full advantage to go one on one with Haig Kingston and he finished his chance well.

Hamersley had the majority of the play but were struggling to find the killer blow despite rarely looking troubled at the back. Both teams had late chances but Rovers saw the game out to win 2-1 and move into the Semi-Finals for the 4th time in 6 years.