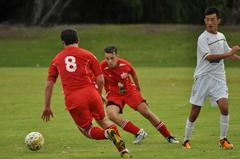 A Declan Peters hat-trick, two goals from Ryan Williams and an opener from Dan Fowler saw Hamersley Rovers’ First Team coast into the second round of the MySolar Cup at the Gerry Archer Reserve on Sunday.

The game was preceded with a  respectfully observed minute’s silence for the late Pete Smith, a loyal Hamersley clubman who had passed away earlier in the week.

After the formalities and handshakes the game got underway, Rovers putting themselves on the scoresheet with just seconds on the clock. A defence splitting through ball from Conor Fullard was met with a neat turn and receive from Dan Fowler, who then finished confidently past the Belmont keeper.

Hamersley continued to press and their second goal was soon to come. On six minutes, a good passage of build up play including a number of players saw the ball fall to Declan Peters, who struck his shot well enough, though the Belmont keeper will feel that he should have done more to save his side from going two goals down.

The away team looked comfortable and enjoyed large amounts of possession, with a well wide shot and a free kick sailing high over Ian Norgrove’s bar being the only real efforts of note from Belmont.

Indeed, the home side suffered a period towards the end of the first half where frustration at their own lacklustre performance seemed to get the better of them. A high challenge caused some discomfort for Ricky Andrews and brought a deserved yellow card for the Belmont player, resulting in the Belmont coaching and ground staff having a number of heated words with the referee, which began to impact on the game. Coach Brad Brooks sensibly ordered his players to rise above it, and they did so professionally, concentrating on the business they were there for.

The concentration soon paid off. On 35 minutes, after a quiet first half, Ryan Williams found himself on the ball outside the box, turned neatly inside and dispatched a left foot effort safely away from the keeper into the top right corner of the goal.

The 3-0 lead was no more than Hamersley deserved from a comfortable first half. The second half started with the same momentum as the first, Fowler putting himself through on goal within the first minute with a great touch, only to find his fierce strike hitting the keeper and deflecting over the crossbar.

Two minutes later it was Williams’ turn but his shot pulled across the face and finished narrowly wide. Then, on 50 minutes, Peters found himself through on goal and made no mistake with a confident strike past the Belmont keeper. Against the stream of Rovers attacks Villa did put the ball in the net, though the effort was correctly ruled out for offside.

Hamersley soon added their fifth, with Peters again finding himself in acres of space and able to finish easily past the helpless goalkeeper. It followed more good play from the Hamersley lads and Peters will have enjoyed getting his hat-trick after weeks of good team play since his arrival this season.

Rovers were not done there,  and with a few minutes remaining Williams producing some fancy footwork to slip past two defenders and beat the keeper at the second time of asking.

It was a solid performance and a result that never looked in any doubt. The lads will now look forward to their home league tie against Spearwood as an opportunity to build on such a confident performance.

Earlier in the day, Hamersley reserves also booked their passage into Round 2 with a comfortable win over Belmont reserves.

A Daniel Malatesta hat-trick, a brace each from Steve Kruit and from Dave ‘Fingers’ Howell, a debut goal for Paul Harmon and another league goal for Scott ‘Karl Pilkington’ McGowan made up the goal fest.

The game was never a contest for the reserves and they displayed a good range of passing and creative play to produce a confident result.

The game was typified by the last goal, as a fine through ball saw Paul Harmon beat the offside trap, and though he cold have finished easily enough  by himself he chose to unselfishly lay the ball to Howell, who walked the ball into the open net.

The ressies can enjoy the result and their fine form, though will now have to ensure that after a few fairly straightforward encounters  they will ready and up for the stronger challenge of Spearwood next week. Undoubtedly coach Tel Stupple will not allow any complacency to creep in.