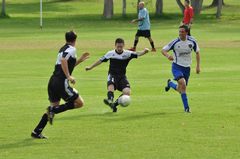 The Premiers were looking to bounce back from last weeks defeat and were up against Perth Royals. Rovers were well on track to do so after taking a 1-0 lead through Luke Smith. Royals got a slice of luck right on the half-time whistle when they were awarded and scored a penalty to square up the game. Royals took the lead after the break with Rovers getting back on terms almost immediately when Mickey Garcia ran on to a through ball and finished well.

Royals again took the lead before a fantastic save from Hammers keeper Matty Bell kept the score at 3-2. He was unlucky a few minutes later when he came out for a one on one and was adjudged to have fouled the Royals striker and was shown a red card. Ryan Sochanik donned the gloves but could do nothing as Royals furthered their lead from the spot. Chasing the game and down to ten men, Royals hit their 5th and the game was over.

The Premier Reserves bounced back from their first dropped points last week to win 4-0 against Perth Royals Reserves. Goals from Steve Kruit, Matty Austin, Billy Wright and a cracker from Aaron Parsons sealed the three points.

Division 4 also had Perth Royals for opposition and were the better team for much of the game. Royals finished their chances while the Rovers goal was scored by Harry Davies from the spot. Division 4 Reserves went down 2-0.

Ladies I secured their first points of the season with a resounding 4-1 win over Beckenham Angels. Ladies II kept up their winning ways and stayed top of the league winning 4-3 against Melville.

Social I played Fremantle United and were a little unlucky to lose 3-1. Social II had a tough day losing 8-1 to Perth City while Social III didn’t deserve to be on the losing side, going down 4-1 to Wanneroo City.

Masters I kept up the pressure on table toppers and next weeks opponents Spearwood Dalmatinac with a tight 1-0 win over Fremantle United. Masters II surrendered a 2-0 lead to lose 3-2 to Kingsway Olympic.

Good luck to all teams for next Sunday.