Rovers Lift the Carine Cup for the First Time 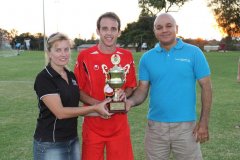 The annual pre-season challenge cup between amateur club Hamersley Rovers and state league club Sorrento FC has ended up going to our semi-pro neighbours every year since its inception in 2007. The records were re-written in style as Hamersley ran out 4-1 winners on a hot afternoon at Percy Doyle Reserve.

Hamersley were quickly on the front foot after the kick off and scored early thanks to a clever piece of finishing from Mickey Garcia. Rovers were soon 2 up thanks a great through ball from Ryan Sochanik which put debutant Sam Long through one on one and he place the ball under the keeper and into the net. Haig Kingston made some solid saves to keep the home team goalless to half-time.

Sorrento pulled one back before Garcia did brilliantly to cross the ball back into the box facing away from goal which was met by Sochanik who finished with ease. The final goal came from Shaun Gibson who had been running the Sorrento midfield ragged. He skipped through three challenges before slotting the ball past their keeper for 4-1. The Rovers defence held firm and towards the end there was time for Ian Norgrove to concede and save a penalty with a great stop.

Member of local parliament Tony Krsticevic presented the Carine Cup to captain Dan Scudder to cheers from the Hamersley supporters. A fantastic team performance where everybody put in a huge effort. The club and the committee is very proud of the effort the team put in and congratulations also to coach Stevie White in only his second game in charge.

Also well done to Hamersley reserves on a top effort against Sorrento 18's. The 1-1 scoreline was not a fair reflection of the game as Rovers had a host of chances to win the game with Dave Howell and Lucas Aus both hitting the woodwork and Mark Hunt also going close. Steve Kruit nabbed the goal thanks to great work from Danny Williams and Howell. A brilliant effort in very hot conditions, well done to you all.

A special thanks to everyone involved in making it an enjoyable afternoon, Sorrento FC for their hospitality and Tony Krsticevic for his continuing support for local soccer and the Carine Cup.