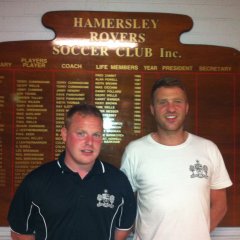 Hamersley Rovers are pleased to announce a new coaching team to take the reigns of the Amateur Premier League squad for 2012. Craig Doble comes in as first team coach while Dale King as been recruited to coach the reserves. Both are young enthusiastic coaches just out from the UK and we are very pleased to have them on board.

They replace outgoing coach Stevie White who did a tough but admirable job pre-season without an assistant but the committee felt the club needed to take a different direction.

Craig is a UEFA B qualified coach and comes very highly credentialed having worked for Bolton Wanderers FC for 3 and a half years under Gary Megson and Owen Coyle for their International Soccer School. Having been on the books at Rochdale and represented Lancashire, Craig got the coaching 'bug' at a young age and hasn't looked back and hopes to complete his UEFA A badge in the near future. 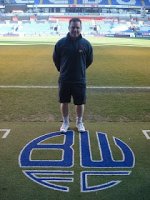 Craig said "I'm looking forward to working with a talented bunch of players. Having watched them play against Quinns FC in the State Cup and train during the week I'm sure once our fitness levels are at the stage they should be I'm confident we can surprise a few people this season."

Dale has been playing for Sutton Athletic a semi-pro club in the Kent Invicta League in England. He will also be seen on the field for Hamersley as he takes up a player coach role. He recently completed his FA Coaching Badge and was keen to join a club and begin coaching and takes over a young and talented group of players in the reserves while working closely with Craig and the overall squad.

We welcome both to the club and hope they thoroughly enjoy working with our players for 2012.