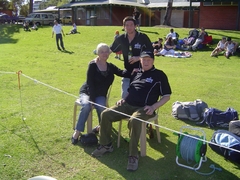 Hamersley Rovers Soccer Club has lost a life member and great friend in Peter Smith. He sadly lost his battle with ill health and passed away on Sunday the 5th of May.

Pete was a valued member of the club and along with his family has been part of 'our' family for many years. From coach to team manager, committee member and Vice President, Pete has been a true supporter and stalwart of Hamersley Rovers.

The club would like to pass on our condolences to his sons Cameron and Damien. His wife Christine, also a huge supporter of the club, passed away two years ago. The funeral service was held on the 14th May at Pinnaroo Memorial Park.

A Hamersley Rovers guard of honour was held for Pete to send him off with the greatest respect from the club and it's members who knew him. Former Hamersley president John Markham said some very kind words on behalf of the club while current players Paul Broom and Daniel Scudder were pallbearers.

One of his good friends sent this thanks to current President Carol Marinkovich on behalf of the club.

"On behalf of Anita and myself, a very sincere “Thank you” for all the help you and the club contributed towards Peter’s funeral.

All the family and friends have all commented on what a great service it was and the impact the club made to its success. The guard of honour, attendance by members in their club shirts, the banner and photos all helped to honour Pete in a very respectful way.

A very large portion of that is thanks to you and the manner and effort you put in to make it so successful.

We greatly appreciate your input and we ask that you express our thanks to the members of the club.