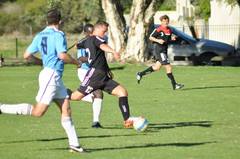 Some mixed results in the cup yesterday for our teams with 3 going through to the next round while 5 bowed out. Unfortunately the Premier Firsts was one of those after a classic cup battle with Backpackers FC. Despite hailing from Division 3, back to back promotions and a cup semi-final appearance in the last two years prove them to be a strong, up and coming club that wouldn't look out of place in the Premier League.

Falling behind to an early goal, Hamersley were on the back foot and a touch lucky not to have conceded more, but held firm until half-time. The second half was a different story with Hammers on top for long periods with Stephen Mulhair and Mike Howard controlling the midfield and Dean Molloy and George Rowlands causing problems for the Backpackers defence. Rovers equalised through a Phil Clarke header and had further chances to Conor Fullard and Rowlands to seal the win as the whistle for full-time went at 1-1 with extra time needed.

Early injuries to Sam Love and Sean Gaskin meant our subs had been used early in the game and there were some tired legs going into extra time with Backpackers coming back into the game. A second yellow to Rowlands saw Hamersley down to 10 men which made a real difference after over 100 minutes played. Backpackers created some good chances but Mark Moore was equal to them until a counter attack caught the Rovers defence off guard to go ahead 2-1.

Rovers strived to create chances but they were hard to come by. Backpackers got another goal to go 3-1 up but Rovers hit back through Dean Molloy to keep the tie alive. Unfortunately it wasn’t to be and the 3-2 defeat ended any chances of going further in the cup. We now look back to the league with a tough encounter with top of the league, Port Kennedy next week.

Rovers Reserves faired better going through on penalties against Backpackers FC Reserves. Hamersley took a 3-1 lead thanks to a sublime Dec Peters free kick, and goals to Matt Austin and Bijan Khadembashi. Letting the lead slip to finish 3-3 the game went immediately to penalties. Despite two misses, Backpackers also failed from the spot three times, putting Hammers through to the next round.

Division 5 Amateurs were up against Maccabi FC from Division 1. Despite the large gap in Divisions the young team fought well but went down 4-1. The reserves played very well but were unlucky to lose 5-3 in a good contest.

Social I went out of the Metropolitan Cup 3-2 to Joondalup United while Social II were victorious in a 2-0 win over Alexander Florina.

Masters I had a walkover against Dianella White Eagles who decided they were too scared to play while Masters II had a heavy defeat, 7-1 , to Western Border.

So Premier Reserves, Social II and Masters I are in the hat for the next round of their respective cups.