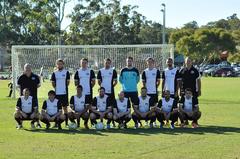 A good couple of weeks for our Premier Firsts has seen a return of 4 points from the last two games. Securing a 2-2 draw with Port Kennedy last week thanks to Mark Moore’s penalty save and Dec Peters late equaliser. This Sunday the team put Queens Park to the sword in a 3-0 win. Sean Gaskin scored the opener while Dean Molloy scored a brace including a well taken penalty. It was a great performance all-round, well supported by the drums and chants of the “Hamersley Hectiks”!

The Premier Reserves put in two strong performances over the past two weeks. Coming off a 10-1 demolition of Port Kennedy Reserves the lads again had their shooting boots on with an 8-1 victory over Queens Park Reserves. Goals from Aza Parsons (2), Nick Hage (2), Dan Willis, Josh Burns, Chris Sweeney and Dave Howell. The Reserves sit top of the league on goal difference.

Division 5 Amateurs secured their first win of the season last week but came up against an in form Forrestfield United and were on the wrong end of a 6-1 score line. The league looks like having 3 breakaway teams but Rovers will certainly be looking to improve and challenge them, having only narrowly lost to league leaders, Emerald FC. Division 5 Reserves had a tough challenge with a strong Forrestfield team winning 8-0.

The Ladies drew 0-0 with East Fremantle and sit 3rd on the ladder with two wins and a draw. Social I lost a tight game 1-0 with Stirling Panthers while Social II, who also versed Stirling, secured a 2-1 win. Social II have had a strong start to the season and sit top of the table with games in hand.

Masters Premiers have been knocked of the perch after a disappointing loss to Bassendean last week. This week saw a 2-1 reverse against a strong Joondalup United in a very close game. Masters II have had two wins on the trot, defeating Kingsway Olympic 2-1 this Sunday.